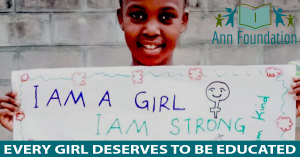 Education should not be a privilege, it is the right of every human being.

Living in the 21st Century, education is still an opportunity. There are countries where it is hard for children to attain an education. The lack of education for young girls is more prevalent and this is true for most rural areas or developing countries. According to UNICEF-Education is a powerful tool for breaking the cycle of poverty; supporting child survival, growth, development, and well-being; and closing the gap in social inequality. The data below shows we still have miles to go in the area of girl education in order to minimize social inequality.

Certain overwhelming economic and cultural factors stop young girls in both rural and urban areas from pursuing the same educational aspirations as their male counterparts. Some of the factors that serve as a barrier for women to pursue their education in rural areas are poverty, culture and tradition, child labor, early marriage, violence at school, and more.

Girls from rural areas who discontinue their education, take part in household chores with their mother or take part in domestic labor to earn a living. They cannot pursue their secondary education or higher education due to poverty. Many girls work as domestic servants or in the agriculture field as early as five years old. Approximately 64 million girls globally are victims of child labor.

In some cultures and traditions, early marriage for young girls is seen as an accomplishment and is given a higher priority than completing one’s education. Child marriages can occur anywhere globally. However, it mostly affects developing countries such as the Central African Republic (68%) and Nigeria (76%).

Gender-based violence in academic institutions is negatively impacting the education of billions of young girls and boys globally according to a report by the Commission on the Status of Women, by the Education for All (EFA) Global Monitoring Report, UNESCO, and United Nations Girls Education Initiative (UNGEI).

According to UNGEI, more than 115 million adolescents and children experience some form of sexual, emotional, and/or physical violence every year. SRGBV prevents children, especially young girls, from discontinuing their studies which can ruin their career aspirations and discourage them to further enroll in any academic institution.

A girl starts her menstrual cycle (periods) once she hits puberty. Periods are a normal part of a female’s body. However, in certain countries, females face period shaming from their community members, family members, or even loved ones. Periods shaming can lead to mistreatment, early marriage, ostracism, health problems, leading to an endangered and marginalized future for women and girls. Lack of sanitary products in academic institutions could also lead to young girls dropping out and being forced to stay at home. In certain developing countries and rural areas, a lack of private toilets for females makes it difficult for young girls to go to school due to a lack of comfort and security.

This is a rising concern in both developed and underdeveloped countries. A survey conducted in Scotland revealed that many girls missed out on school during their monthly menstrual cycle because they couldn’t afford to purchase basic sanitary products. Females from rural areas of Nepal are often forced to stay out of their homes and are forbidden to remain in contact with people, plants, and even animals. This practice can prove to be lethal for a girl’s mental, emotional and physical health.

What Can You Do To Help?

We at Ann Foundation aspire to bring the basic right of education to children and young people across the world because we believe that education creates a better tomorrow for everyone. Our volunteers offer tutorship to students more than 6 times a week. If you wish to help provide educational facilities or necessities to our students, then donate now or contact info@annfoundation.org.